Prior to meeting Zen Master Seung Sahn and becoming his first American student in 1972, Soen Sa Nim practiced with Suzuki Roshi at the San Francisco Zen Center, and devoted one year to practicing with Tarthang Tulku at the Tibetan Nyingmapa Meditation Center in Berkeley, California.

He helped Zen Master Seung Sahn in establishing the Kwan Um School of Zen in Poland in 1978.

In 1984 he received inka (authorization to teach) and began to teach regularly in the United States and in Europe.  Soen Sa Nim graduated from Brown University where his concentration was mathematics and holds a fourth degree black belt in Shim Gum Do, a Korean art of swordsmanship.

In 1993, Soen Sa Nim received the transmission of Dharma and became the seventy-ninth Patriarch in his lineage.

Between his inka and transmission he was very active teaching in Asia, South Africa, and America, but mostly in Europe.

In 2008 he moved to Korea to prepare himself to become a monk.  In order to keep a place in Europe he moved into the Berlin Zen Center, which from that time onward became his home in Europe.  In 2009 he was ordained as a Buddhist monk in Korea.

Wu Bong Sunim Seon Sa left his body after a cardiac arrest on Wednesday April 17th 2013 at 1 pm while leading a Yong Maeng Jong Jin at the Paris Zen Center.  He is greatly missed by his family and all his students and disciples in the Kwan Um School in Europe and worldwide. 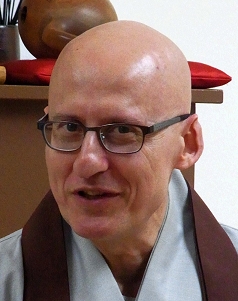