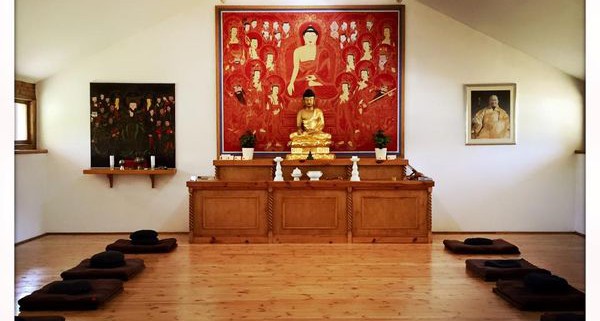 Wubongsa Temple in Warsaw, Poland invites you to participate in our Winter Retreat, from 2 days up to 4 weeks of intensive practice. We have more than 30 years of experience of running traditional long winter retreats in a beautiful renovated Dharma Hall, with adequate facilities, dedicated staff and easy transportation options. Since we always have participants from around Europe and Israel, all instruction is both in Polish and English. See you soon!

We will host the following teachers:

We invite you to the first two weeks ot the Winter Retreat to practice with Dharma Master Andrzej Stec, one of the first Polish teachers of the Kwan Um School of Zen! We are very happy that after a dozen or so years of being away from Poland, students will have the opportunity to meet this extraordinary teacher.
Andrzej Stec, after receiving a master’s degree in architecture in his native Poland, met Zen Master Seung Sahn at a public talk  in his hometown of Gdansk. He became his student and began practicing Zen in 1981. He received the Inka (seal of teaching) from Zen Master Seung Sahn in 1998 and has since taught in Europe, the United States and Asia. Andrzej Stec JPDSN has developed a Mantra Walk, emphasizing a practice that integrates with active everyday life to develop our wisdom and maintain optimal health of mind and body. Together with his wife, Kathy Park (Il Hwa) JDPSN, he is the co-teacher of the Kwan Um Seoul Zen group, Gangnam Zen Group and the Kwan Um Daejeon Zen group.

Koen Vermeulen JDPSN began his apprenticeship at the Kwan Um School of Zen in 1992. When Zen Master Bong Wu and his wife moved to Paris in 1995, he often traveled from Brussels to Paris for monthly retreats. He participated in a seven-week retreat in 1995 and a three-month Kyol Che in 1998 at our temple Wu Bong Sa. He lives with his wife and two sons at the Brussels Zen Center. In his free time he loves to play the piano and compose music.
Koen earned a master’s degree in applied economics at KU Leuven University in 1989, and also at Quantitaf Marketing at the University of Grenoble-II in 1990. In his current work as Secretary General of the Belgian Buddhist Association, he is in contact with many Buddhist associations. Major projects are related to the recognition of Buddhism in Belgium and training programs in Buddhist philosophy and ethics, Buddhist counseling in the healthcare sector and work in prisons. On March 9, 2013, Koen Vermeulen received an Inka from Zen Master Wu Bong at the Wu Bong Sa Temple.

We invite you to the last week of retreat, this time with our guiding teacher Zen Master Joeng Hye!
Joeng Hye SSN first encountered Zen practice as a member of a theater group that organized a series of workshops on human spirituality with teachers from various traditions. A few years later, he became a student of Zen Master Seung Sahn. He trained intensively in our Wu Bong Sa, the main temple of the school in Poland. After fourteen years of practice, he received Inka on March 5, 2000 from Zen Master Wu Bong. and the Dharma transmission on March 19, 2016 from Zen master Dae Kwang. Joeng Hye SSN works as a physiotherapist. He teaches extensively in Poland, Lithuania and other European countries.