Dharma Master Bogumila Malinowska (Ja An Ji Do Pop Sanim) is a Guiding Teacher at London Zen Centre and living in London.
She teaches in the UK and abroad and sits long zen retreats regularly.
She met Zen Master Seung Sahn in 1981 in Poland.
In 1988 she went for 100 days solo retreat. She was leading zen groups in Pila and Poznan while she was living in Poland since 1985-2003 before she left to the UK.
She was born in North-west Poland.
After postgraduate teacher training, she was working professionally as a language teacher at High Schools in North Poland and then as a youth center’s manager with youngster with challenging behavior.
She is a licensed counselor/psychotherapist in private practice in North London  registered at British Association of Counsellors and Psychotherapists (BACP).

She works as a speaker for multi faith :The Faith & Belief Forum organisation dedicated to diversity in UK.
In 2005, she established London Zen Centre two years after moving to UK with the spiritual support of Zen Master Wu Bong. She received Inka (authority to teach koans and lead retreats ) from Zen Master Wu Bong in September 2009 at the Warsaw Zen Centre(Wu Bong Sa). She works in the EKUSZ’s council.S he is also a teacher at KUSZ’s online sangha since January 2018.

Talk by Ja An JDPSN 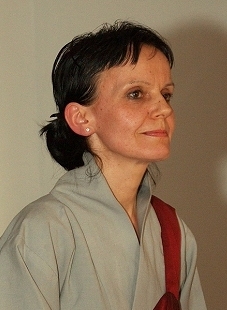