Ji Kwang Soen Sa Nim (Zen Master Roland Wöhrle-Chon) was born in 1960 in Germany.  He studied Philosophy and Psychology in Bonn, Berlin and Madurai, India, where he had his first contact with yoga and meditation. Zen Master Ji Kwang has a Ph.D. in Psychology and works as a social scientist for the German Government.  He is married and has two children.  Together with his wife, Gu Ja SSN, he established the Zen Center in Berlin and the Kwan Um School of Zen of Germany in 1990.  He received Inka in February 2000 and Dharma Transmission in April 2012 from Zen Master Wu Bong.  Zen Master Ji Kwang is currently the Head Teacher of the Kwan Um School of Zen in Europe. 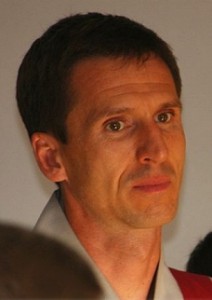 “The Buddha is golden. Is this mind or no mind? If you have mind, how do you keep it? If you have no mind, then what?”