Bartolomé Cantarellas Socías JDPSN received inka from Zen Master Bon Shim in September 2019. He met Zen Master Seung Sahn in 1981 at a retreat that was held in a monastery in Palma de Mallorca. In 1983 Bartolomé moved to Girona, in Catalonia, where he lived at Ahabah, a community that organized retreats and therapies for groups. In 1986 he was resident for a time at the Zen center in Paris, where he lived with Zen Master Seung Sahn for a few months. He has visited Korea several times, first in 1987. Bartolomé has been abbot of the Palma Zen Center for the past twenty-five years and has attended retreats in France, Poland, Germany, the United States, and Spain. A nurse by profession, he works in rural areas as a specialist in occupational health and out-of-hospital emergencies. He and his wife currently live in the countryside on the outskirts of Palma. 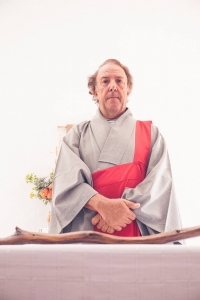