The founding Zen Master of the Kwan Um School of Zen

“I hope you only go straight don’t know, practice hard for other people, attain Enlightenment, Great Love, Great Compassion, and the Great Bodhisattva Way, and save all people from suffering.” 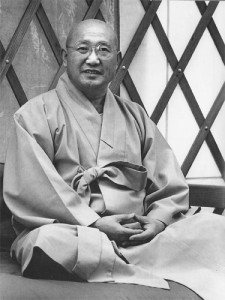 Zen Master Seung Sahn (Dae Soen Sa Nim) was the founding teacher of the Kwan Um School of Zen, and the seventy-eighth Patriarch in his line of Transmission in the Chogye order of Korean Buddhism.

He received transmission at the age of twenty-two years from the famous Korean Zen Master Ko Bong, so becoming the youngest Zen Master in Korea. After three years of silent meditation, he devoted himself to the renovation of the Chogye Order and founded an important lay organization, the United Buddhism Association.

After founding temples in Tokyo and Hong Kong, Zen Master Seung Sahn came to the United States, becoming the first Korean Zen Master to live and teach in the West. With the aid of a small number of students, he founded the Providence Zen Center, which eventually became the headquarters of more than one hundred centers throughout the Americas, Europe, Asia, and Africa.

Zen Master Seung Sahn is the author of ‘Compass of Zen’, ‘The Whole World is a Single Flower – 365 Kong-Ans For Everyday Life’, ‘Dropping Ashes on the Buddha’, ‘Only Don’t Know’, ‘Ten Gates’ and ‘Bone of Space’. 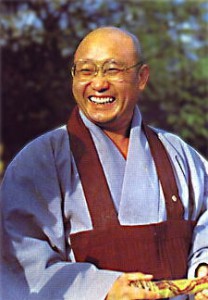