Zen Masters and Dharma Masters of the Kwan Um School

Alma Potter SSN received Inka in May 2008 at the Berlin Zen Center from Zen Master Wu Bong. She is Guiding Teacher for centers and groups in Austria, Spain, Hungary and Mexico… Read More

Ja An JDPSN (Dharma Master Bogumila Malinowska) is the Guiding Teacher of the Kwan Um School of Zen in London.  She received Inka from Zen Master Wu Bong in September 2009 at the Warsaw Zen Center. Read More

Koen Vermeulen JDPSN received Inka from Zen Master Wu Bong in Poland on March 9, 2013.  He lives with his family  below the Brussels Zen Center and is the resident teacher in Brussels…  Read More

Igor Piniński JDPSN received Inka from Zen Master Bon Shim at Wu Bong Sa in Poland on March 9, 2013.  He was the abbot of the Łódź Zen Center for 14 years and is now the resident teacher there…  Read More

George Hazlbauer JDPSN received Inka from from Zen Master Dae Kwang In 2016, he was the abbot in the american school’s main temple in Providence. Currently he serves as abbot in Vrazne Zen Center, Czech Republic …  Read More

Knud Rosenmayr JDPSN  received Inka from Zen Master Ji Kwang in 2016 at Wu Bong Sa, Poland on 2016. Since 1999 he is the group director of the Viennese Kwan Um Zen group and became the abbot of the Vienna Zen Center in 2013. …  Read More

Barbara Pardo JDPSN received inka from Zen Master Bon Shim in 2019. Barbara’s father, Fernando, was one of Zen Master Seung Sahn’s first students in Spain, and has been the abbot of Bori Sa Temple in Barcelona since the 1980s. Read More

Bartolomé Cantarellas Socías JDPSN received inka from Zen Master Bon Shim in September 2019. He met Zen Master Seung Sahn in 1981 at a retreat that was held in a monastery in Palma de Mallorca. In 1983 Bartolomé moved to Girona, in Catalonia, where he lived at Ahabah, a community that organized retreats and therapies for groups. Read More

Jan Sendzimir JDPSN received Inka from Zen Master Ji Kwang September 2022. Jan was born in the USA to a Polish father and a French mother.  He began practicing with Zen Master Seung Sahn in 1975 in Providence Rhode Island. Since then he has been practicing and living in different Kwan Um Zen Centers in the US and Europe. He works as a scientist and focuses on climate change, resilience and sustainability. His work has taken him across the globe.  Additionally, he is a passionate photographer in his free time. He lives in Vienna Austria with his life-partner and is the abbot of the Vienna Zen Center.  He has two daughters.

Dušan Silváši JDPSN received inka from Zen Master Gu Ja in September 2022. He was born in Košice, Slovakia. In 1992 he started practicing with the Kwan Um School of Zen, first with Zen Master Wu Bong and Zen Master Dae Kwang and later with Oleg Šuk JDPSN. He works as an IT specialist and has also been a teacher of Karate for many years. He has been the abbot of Košice Zen Center for 17 years. He has 2 children with his wife Olga (also a longtime Zen practitioner) and together with her he has been working on spreading the teaching of Zen to a much wider audience with projects involving Yoga, Karate and recently also with IT professionals.

Tonda Horåk JDPSN received Inka from Zen Master Bon Shim in September 2022. He was born in Czech Republic and started practicing Zen in 1999, and he was a novice and monk in Korea in Musang Sah from 2002 till 2010. When he met Barbara Pardo JDPSN, he fell in love, left monkhood and they got married. Since 2010 they have been living in Spain and together with Zen Master Bon Shim they founded the Retreat Center Bori Sa in the Pyrenees where they live and organize many retreats.

Myong Hae Sunim JDPS was the first Buddhist nun in Lithuania. After becoming a nun in Korea in 1997, she moved to Hong Kong and was trained by Zen Master Dae Kwan. In 2016, she received “inka”, or permission to teach, and became a “Ji Do Poep Sa Nim” in the International Kwan Um School and the second guiding teacher of Su Bong Zen Monastery  Read More 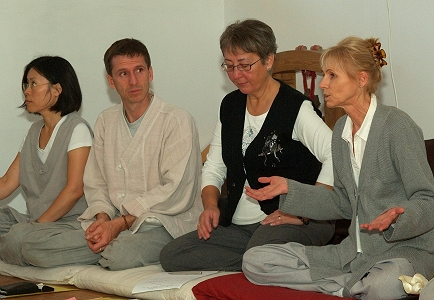