Dharma Master Chon Mun Sunim, received Inka in April 2002 In Providence Zen Center. He began studying with Zen Master Seung Sahn in his native Poland in 1980. In 1986, he came to train at the Providence Zen Center, USA. He has participated in many retreats both in the U.S. and in Korea, in addition to visiting Eastern European Zen centers. He took novice monk precepts in September 2009 in Magoksa, Korea. After completing training in kangwon (a traditional monastic training center) at Beomeosa Temple in Busan, he received bhikku (full monk) precepts in April 2015. Since then he has taken part in 90 day retreats twice a year in Korean Zen Centers. He also sat 4 long solo retreats in Beskidy Mountains in Wisła, Poland, on the land owned by our KUSZ sunims through the Unsu Foundation. This land was donated to the sunims with the intention to build a monastery/zen center there that would become their home in Europe. 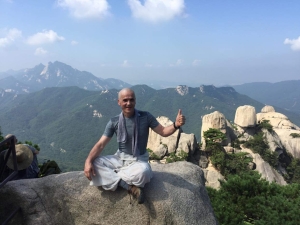