Arne Schaefer JDPSN began practicing meditation in the late 1980ies and started regular practice in the Tibetan Kagyu Tradition (Diamond Way) in 1990.  Since his first Zen retreat with Zen Master Seung Sahn in 1992 he has been practicing with the Kwan Um School of Zen and attended many Zen retreats in Europe, USA and in Korea. In 1996/1997 he built the Berlin Zen Center and was active as chairman in the board of directors of Kwan Um School of Zen Germany for over 15 years. He received Inka in April 2010 from Zen Master Wu Bong and is the Guiding Teacher of the Dresden Zen Center and the Zen groups in Hamburg and Bad Bramstedt (and Munich).

He was awarded a Master’s degree in religious studies anthropology and philosophy (1996) and a Master’s degree in psychology (2002) from the Free University of Berlin. His wife Irmi has been practicing for over 25 years in the Kagyu Tradition.  Together they established LotusConsult to integrate their shared Buddhist background with their work as coaches and consultants.
In 2010 he founded mind sweets GmbH, a company creating and selling vegan sweets in the organic food market, that has become his main business. 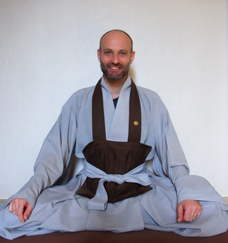