Koen Vermeulen JDPSN began practicing in the Kwan Um School of Zen in 1992.  When Zen Master Wu Bong and his wife moved to Paris in 1995, he traveled frequently from Brussels to Paris for the monthly retreats.  He participated in a seven-week retreat in 1995 in Wu Bong Sah Temple in Poland and a three-month Kyol Che in 1998.  He lives with his wife and two sons below the Brussels Zen Center which offers accommodation for two residents.  In his free time he loves to play piano and compose music.

Koen received a Master’s degree in Applied Economics from the university of KU Leuven in 1989 and in Quantitaf Marketing from the University of Grenoble-II in 1990.  In his current job of Secretary General of the Belgian Buddhist Union, he is in contact with many Buddhist associations.  The main projects are related to the recognition of Buddhism in Belgium and to training programs in Buddhist philosophy and ethics, Buddhist counseling in the health sector, and prison work.

On March 9 2013, Koen Vermeulen received Inka from Zen Master Wu Bong in Wu Bong Sah Temple in Poland.  This means he is a qualified Zen teacher in the tradition of the Kwan Um School of Zen, which includes Kong An teaching and leading Zen retreats and ceremonies. 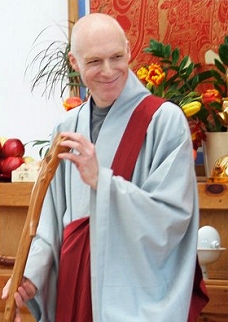