Yuval Gill JDPSN was born in 1964 in England and arrived in Israel with his family in 1969 .He started practicing Zen in 1995 with an Israeli Zen teacher. In 1998, he travelled to Korea to practice in Hwa Gye Sah Temple. Upon his return to Israel in 1999, Yuval co-founded the first Kwan Um Zen Center in Tel Aviv.

Today, he is the Abbot of Kwan Um Israel. For the past 10 years, Yuval lives in Hod Hasharon Zen Center with his wife and two daughters .Yuval studied finance in London and law in Israel. He is a family and business lawyer and mediator. In 2001, he established a mediation company that operates peace-making programs in schools and communities throughout Israel. 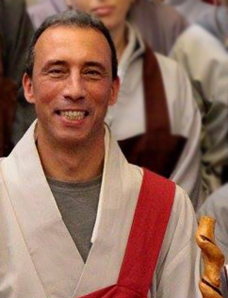