Bon Shim Soen Sa Nim (Zen Master Aleksandra Porter) received Inka in 1992 from Zen Master Seung Sahn and Dharma transmission in 2006.  She is the Guiding Teacher of Kwan Um School of Zen Europe, and of centers and groups in Poland, the Czech Republic, and Spain and regularly leads Kyol Ches in Poland as well as teaching extensively throughout Eastern and Western Europe, Korea and the United States.  She was a student of Zen Master Seung Sahn from the time of his first visit to Poland in 1978 and lives at the Warsaw Zen Center, Wu Bong Sa. She received a transmission from Zen Master Wu Bong on 24 September 2006 in a ceremony at the Warsaw Zen Center. 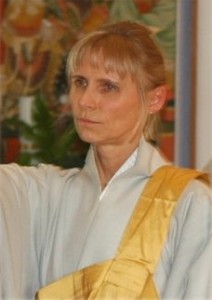 You can react to this moment with “Only that?” or you can experience it totally, completely. It is possible only when you experience what there really is, not your ideas.