Zen Master Hyon Ja (Jo-Alma Potter) was born in Arizona USA in1954. She has a Bachelor of Science degree in clinical nutrition from Arizona State University.

In 2008, she  received the title Ji Do Poep Sa and Inka — the official seal of approval to teach kong-an — from Zen Master Wu Bong.  She has traveled worldwide leading and teaching Zen retreats. She moved to Vienna in 2012.

Congratulations to our new Zen Master! 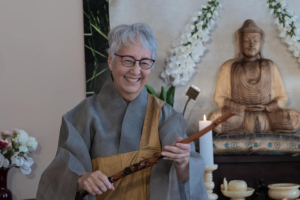 Want to join the discussion?
Feel free to contribute!

This site uses Akismet to reduce spam. Learn how your comment data is processed.

A message on the Coronoa virus from our teacher Arne Schaefer JDPSN.